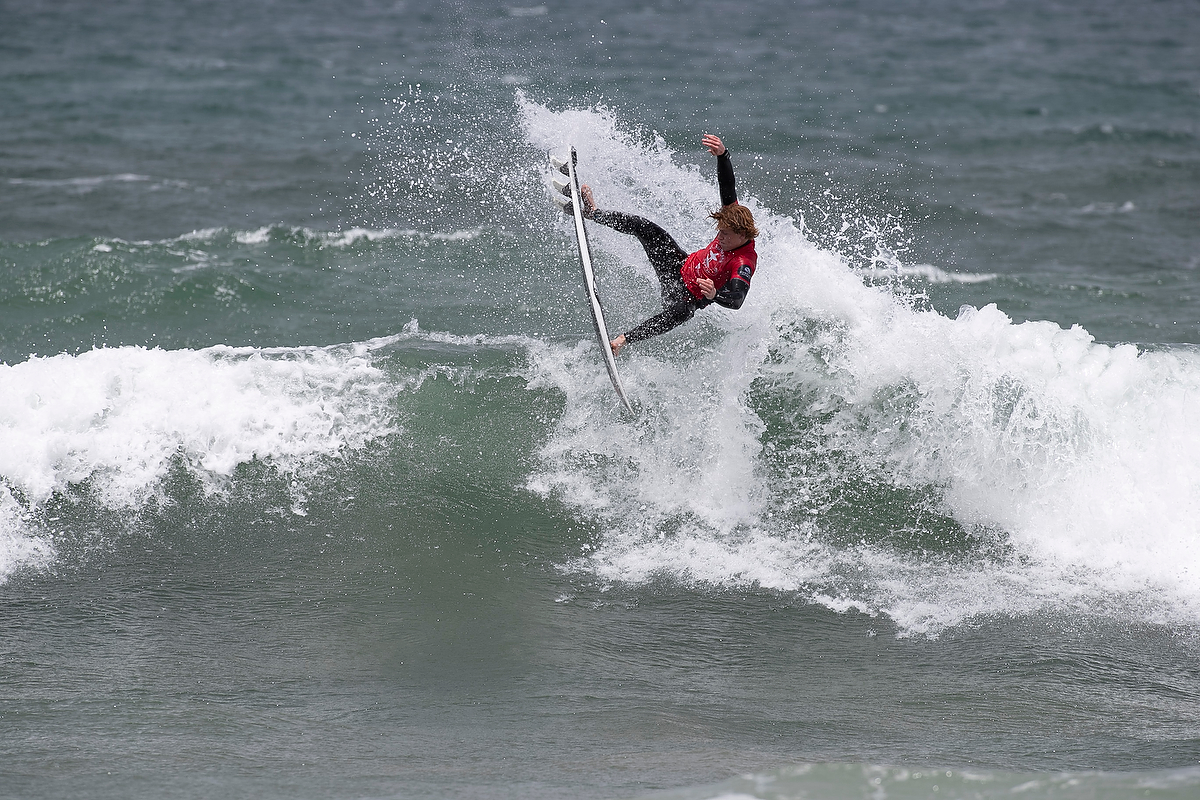 Current WSL Qualifying Series surfers Xavier Huxtable (Jan Juc) and Sophie Fletcher (Phillip Island) have claimed round one wins at the Victorian Open Series as part of the West Coast Surf Festival presented by Surfers Rescue 24/7 over the weekend.

With a small swell and onshore winds, the event was moved to the secondary location of Jan Juc on Saturday.

Huxtable dominated throughout the day, scoring over 16 points (out of a possible 20) for every heat he surfed in and finishing in the final with a 16.10 heat total.

In the Women’s division, Sophie Fletcher went under the radar through the opening rounds before finding her form in the final and locking a 14.70 heat total to finish ahead of former Australian Junior Champion Ellie Harrison (Barwon Heads) on a 13.17  heat total.

Finishing in third was Zoe Clarke (Jan Juc) on 10.77 points, with Emily McGettigan (Torquay) in fourth on 7.86 points.

With a slight increase in swell on Sunday, the event was shifted back to Bells Beach to see Boardrider Club rivalries were re-ignited at the  Victorian Teams Titles.

One of the most prestigious clubs in the State, Phillip Island, were in strong form throughout the event on their way to re-claimimg the Teams Trophy.

With Carl Wright and Sophie Fletcher leading the charge in the final, Phillip Island finished with a combined total of 35.87 ahead of reigning champions Torquay Boardriders Club on 35.50 points.

“It was great to come down to Bells and surf with everyone” said Wright.

“The conditions were better than previously anticipated throughout the week leading up to competition and I’m stoked the club got the win!”

Reigning Torquay Boardriders Club came out swinging in the final, however were delivered a blow when they were deducted points due to an incorrect board swap over when Xavier Huxtable broke his board in the final.

Huxtable swapped his board with fellow team mate Cahill Bell-Warren who was waiting in the water in the change-over zone as the next surfer for Torquay which is not allowed according to the Surfing Australia rule book. They were delivered a 5-point penalty.

In third place was Jan Juc Boardriders, who were in fine form but struggled to find adequate waves to get the job done in the final finishing with a heat total of 28.71.

13th Beach Boardriders finished in 4th position with a combined total of 19.63.

In the Junior division, Torquay Boardriders Club continued their dominance, leaving the rest of the field in a combination situation, with a combined heat total of 40.93.

Peninsula Surfriders finished runner up with Point Lonsdale and 13th Beach in third and fourth.

In an exciting new female only division, Torquay secured the inaugural win with heat total of 37.63. Following them was Peninsula Surfriders on 26.69.

Point Lonsdale finished in third on 21.86 points with newly formed Surf Coast Womens Boardriders in fourth on 9.22 points and 13th Beach in 5th place with a total of 7.17.