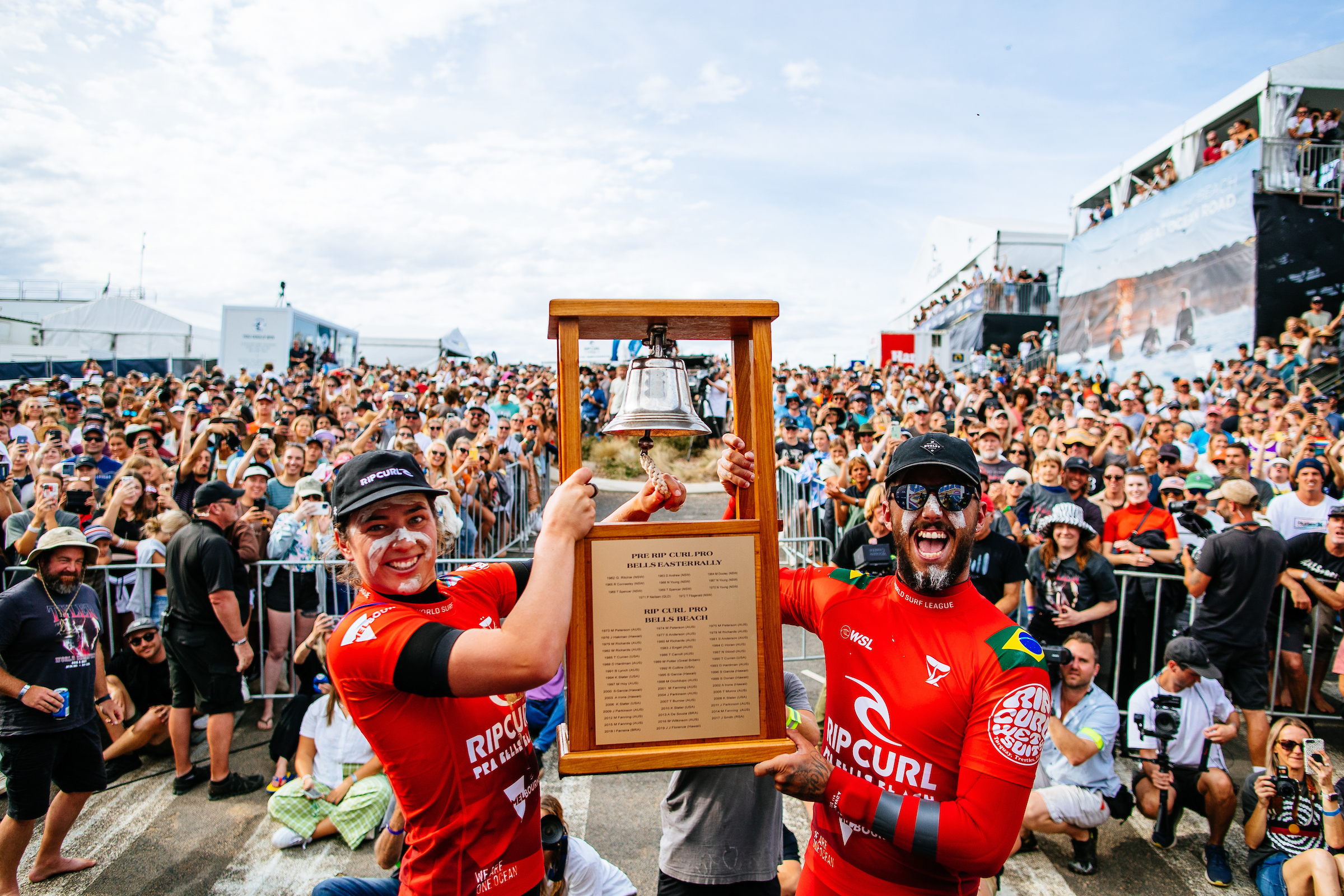 BELLS BEACH, Victoria, Australia (Sunday, April 17, 2022) – Today, Tyler Wright (AUS) and Filipe Toledo (BRA) won the Rip Curl Pro Bells Beach, the fourth stop on the World Surf League (WSL) 2022 Championship Tour (CT). After previous runner-up finishes at the event, it was the first win at the iconic Bells Beach for both surfers who adapted perfectly to the move from the Bells Bowl to Rincon in clean but dropping surf. The morning saw three-to-four foot conditions with competition finishing in two-to-three foot waves in the afternoon.

Two-time WSL Champion Tyler Wright (AUS) claimed her 15th CT event win today and her maiden Rip Curl Pro Bells Beach title. Wright was the form surfer of the event, posting excellent scores throughout, with the Final being no different.

In the last heat of the event, Wright took on three-time Bells winner and reigning five-time WSL Champion, Carissa Moore (HAW), in what was their third Bells Final together. With Moore clinching wins over Wright in 2013 and 2014, Wright found redemption from the first exchange, as she posted an 8.93 (out of a possible 10) in the opening seconds of the heat then backed it up with an 8.00 and left Moore chasing for the remainder of the heat. It is Wright’s first CT victory since the opening event of the 2021 season and it has rocketed her to the second position on the world rankings.

“Honestly this means the world right now,” said Wright. “I want to start by thanking the Wadawurrung people for having us here on their country this week. This is an emotional win for me. I’ve won two World Titles but this win feels almost as big for me. I’ve been competing here and walking down those stairs for 12 years now and to get the win, with a lot of my family here, I’m over the moon and beyond stoked.”

“It’s been a long four years for me recovering from what I went through (post-viral syndrome) and I’m only just feeling like myself in the water again,” continued Wright. “There’s been multiple times where I just wanted to give up. I worked so hard to be here, and I’m just so beyond grateful to have the support I had, and the love and the care as well. It is more than a win, it’s the only event I ever really wanted to win and here I am and I’m pretty over the moon and beyond stoked.”

5x WSL Champion Moore Back to World No. 1

Five-time WSL Champion Carissa Moore (HAW) headed into the Final looking to add to her three Bells titles and join the likes of Mick Fanning, Stephanie Gilmore, Kelly Slater, and Mark Richards as four-time Bells Winners. Unfortunately for Moore, she came up against a rampaging Wright in the Final and was unable to find the same rhythm as her opponent. From the second-place finish, Moore was able to find the positives as she leaves Victoria with the yellow leader jersey and heads to Margaret River, a location she has found much success at.

Finishing runner-up to John John Florence (HAW) at the Rip Curl Pro Bells Beach in 2019, the last time the event ran, Filipe Toledo (BRA) came into the 2022 event with one thing on his mind: to ring the iconic Bell. The eclectic natural footer has a brand of surfing that suits Bells to no end, whether it’s aerials at Rincon or carves on the Bowl, Toledo has it all and it was on full display all week. In the Final, Toledo came up against 2022 CT rookie Callum Robson who was on a devastating run of form, but it was no match for the perennial title threat as he claimed his maiden Rip Curl Pro Bells Beach title and takes the top spot on the world rankings ahead of the Margaret River Pro, an event where he is the defending winner.

“Finally we are back at Bells,” Toledo said. “The last few years we haven’t been able to come here because of everything that has been going on and we’ve missed you Bells. I’m really happy to be back here, it’s been an amazing week. I couldn’t be happier with this birthday present. After I beat John (Florence) I had that extra confidence going into the next few heats which was exciting. It was cool to share a Final with Callum. I’ve been coming here for nine years trying to get a Bell and this guy is in the Final in his first year, which is crazy. Really impressive. This is hard, it’s hard to keep the momentum, and the rhythm going from contest to contest so hopefully we can keep it going.”

Although he was unable to take the top spot, 2022 CT rookie Callum Robson (AUS) taking second place at the Rip Curl Pro Bells Beach is a major achievement and a testament to the incredible surfing he was displaying all week. Taking down names like Mick Fanning (AUS) and Jack Robinson(AUS) along the way, Robson now finds himself in sixth place on the rankings.

Earlier in the day, Wright overcame former Bells winner Courtney Conlogue in the Semifinals with Moore taking down 2022 form surfer Brisa Henessy (CRI) to cement her spot in the Final. Robson upset Jack Robinson (AUS) in his Semifinal with Toledo overcoming Ethan Ewing (AUS) in Semifinal 1.

After the first five events of the 2022 CT season, the new Mid-season Cut reduces the CT fields to the Top 22 men and Top 10 women, in addition to two men’s and two women’s wildcards (one season wildcard and one event wildcard). All surfers who make the cut continue on the CT in an effort to make the WSL Final 5 and compete in the Rip Curl WSL Finals, as well as automatically requalify for the 2023 CT. Those who do not make the cut will need to compete on the 2022 Challenger Series in order to qualify for the 2023 CT.

Following the fourth stop on the 2022 CT, the Rip Curl Pro Bells Beach, the first competitors to make the cut are officially locked. The next stop on the 2022 WSL CT, the Margaret River Pro, will be the final opportunity for the remaining CT surfers to make the Mid-season Cut. There are only six spots left on the women’s CT and only nine spots on the men’s CT to be decided at the Margaret River Pro.

Next Stop: Margaret River Pro
The next stop on the 2022 WSL CT is the Margaret River Pro, which opens on April 24 and holds a competition window through May 4, 2022. The event will be broadcast LIVE on WorldSurfLeague.com, WSL’s YouTube channel, and the free WSL app. Check local listings for coverage from the WSL’s broadcast partners. For fans watching in Brazil, coverage of the competition’s Quarterfinals and beyond will continue exclusively on WorldSurfLeague.comand SporTV.