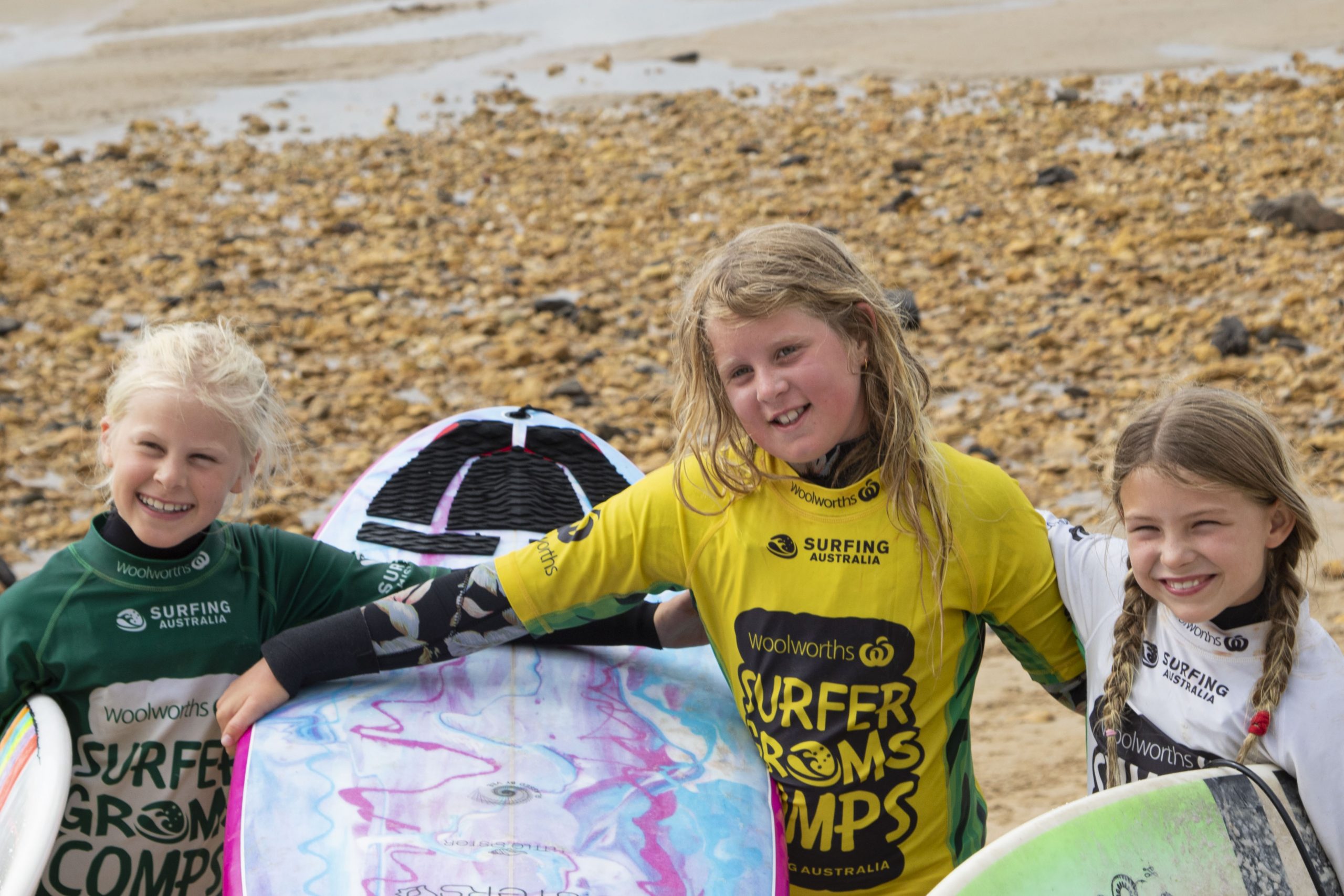 Competition resumed at Torquay Point for finals day of the Woolworths Surfer Groms Comp with fun sized 2- 3 foot waves and light offshore winds. This combined with the warm sunny weather allowed the groms to have the best competition day possible down at Torquay beach.

Ashton Crowley (Port Noarlunga South) took out the Under 14 boys with a combined score of 13.50 (out of a possible 20 points). Crowley was on his way to a winning heat total from the start as he scored a 7.67 point ride (out of a possible 10) by catching one of the best waves of the day and smashing out multiple critical mounevers.

Closely behind him in second was Remy Filer (Jan Juc) with a 7.83 point ride of his own. This came off the back of his aggressive backhand attack which earned him the highest scoring wave of the heat but unfortunately he wasn’t able to obtain a back up score to get him into first.

However, Filer was still awarded the invite to the Woolworths Surfer Grom Comps National Final Surf Camp at the Surfing Australia High-Performance Centre (HPC) as the highest ranked Under 14 boy Victorian surfer of the event.

“It feels really good to win this event,” said Crowley.

“The waves all day were heaps of fun and everyone was shredding, which was epic!” he continued.

After executing a dominating performance on day 1 Rose Holland (Dromana) continued her momentum into finals day as she went on to win both the Under 12 and Under 14 Girls divisions.

In both finals Holland was able to score a 6.17 point ride through her swooping backhand carves. This combined with some solid back up rides gave her the combined heat totals of 11.17 and 10.17 and the edge over her competitors to take the win in both divisions.

Coming in second place in the Under 14 girls final was Dune Pruvot (Torquay) on 10.17 points with Lillian Bassed (Sandy Point) and Billie Cook (Billie Cook) finishing in third and fourth respectively.

Placing second in the Under 12 girls was Elsie Chapman (Point Lonsdale) on 8.16 points with Scarlett Rennie (Cape Woolamai) and Isabel O’Boyle (Lennox Head) finishing in third and fourth.

Throughout the event the judges were on the lookout for the Woolworths fresh move award which would be awarded to the the best and fairest male and female surfers from each event that displayed a high degree of sportsmanship and exhibited future surfing potential.

At the end of the event Conor O’Boyle (Lennox Head) and Lillian Bassed (Sandy Point) were awarded the honour which came with a $100 Woolworths E-gift Card.

The results and scores from the event can be accessed via www.surfingvic.com/live