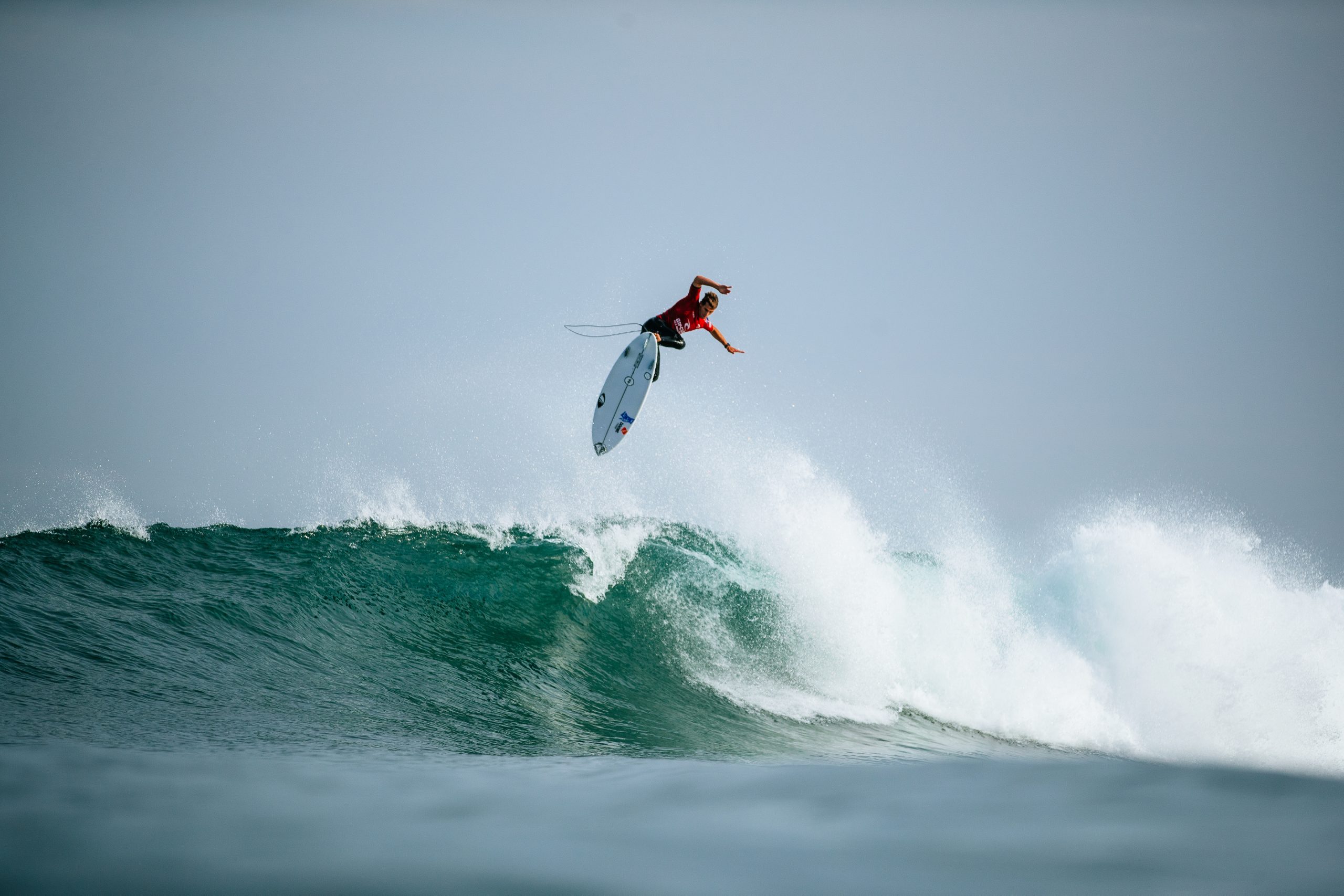 BELLS BEACH, Victoria, Australia (Thursday, April 14, 2022) – The Rip Curl Pro Bells Beach, the fourth stop on the World Surf League (WSL) 2022 Championship Tour (CT), has seen an incredible day of competition today with some of the world’s best male surfers raising the performance bar in pumping, three-to-five foot surf at Bells Beach. The men’s field is now down to the Round of 16 after eliminating competitors in 16 heated match-ups that could make the difference between a spot on the Tour in the second half of the year or heading back to the Challenger Series to re-qualify for the 2023 CT.

In one of the craziest heats of the season so far, reigning Bells winner JohnJohn Florence (HAW) put on an incredible performance, posting a heat total of 18.86 (out of a possible 20), which consisted of a near perfect 9.93 (out of a possible 10) to overcome Brazilian rookie Joao Chianca. Florence was rewarded for his trademark frontside rail surfing, but it wasn’t an easily won heat as Chianca fought back with incredible power surfing, posting the second-highest heat total of the event, a 17.73 two-wave combination. After an epic matchup at the opening event of the year at Pipeline, Chianca and Florence seem to be making a habit out of putting on some of the most groundbreaking head-to-head performances of the 2022 CT season.

“The waves are amazing right now,” Florence said. “That was a hard heat with Joao. Already this year we’ve had some really good heats and it’s always so fun and such a battle with him. It’s always tough coming up against a rookie because you never know what they’re going to do. I had a crazy heat with him at Pipe and then it’s like, no matter what the waves are like he’s so good. I’d love to win here again for sure, when the waves are like this it just means more time in the water which is fun.”

Wildcard entry Mick Fanning (AUS) took the win in his matchup against World No. 1 Kanoa Igarashi (JPN) with a nail-biting wait for final scores. Opening up with some strong waves, Fanning was able to take the lead early on and solidified his position with an 8.77 (out of a possible 10) late in the heat. Igarashi threw everything he had into his final wave but the 8.00 he earned wasn’t enough to take down the four-time Bells winner.

“As a wildcard you want to come on and put on a performance,” Fanning said. “You’re going up against World No. 1, and you know, I’ve got nothing to lose, I’m just coming here to have fun and I’m just stoked we got some waves. It was tight at the end and we had a couple of back to back moments, which is fun, that’s what you really want to do. For me, I’m just having fun and to get to surf Bells pumping with only one person out, that’s the gift.”

Italo Ferreira (BRA) finished the day with a heat win over Ryan Callinan(AUS) as the 2019 World Champion sets his sights on grabbing the Bell for the second time in his career. 11-time World Champion Kelly Slater‘s Rip Curl Pro campaign came to an end after rookie Imaikalani deVault (HAW) defeated the veteran by 0.07 in an epic battle to progress to the Round of 16. Slater looked in good connection with the Bells Bowl but couldn’t continue the trend of the former World Champions claiming wins in the Round of 32.

Heat 1 of the Round of 32 saw MEO Pro Portugal winner Griffin Colapinto(USA) go head to head with Australian Owen Wright, two surfers in two very different situations on the rankings. While Colapinto is looking to secure a spot in the top 5, Wright is in need of a massive result to save his spot on the CT ahead of the Mid-season Cut. Wright played a patient game, only surfing three waves in the heat, but it was enough to see him take a much-needed win and progress into the Round of 16 for the first time this season.

“I’m a bit emotional after that,” Wright said. “I haven’t been past that round for a long time. I only had two opportunities that heat but I put it there and got it done. I never counted myself out to win that heat–my goal every year that I come here is to ring that Bell–I was just out there thinking of the Bell. I’ve had a lot of ups and downs in my career and I’m getting better at riding those ups and downs.”

Ryan Callinan (AUS), Frederico Morais (PRT), Deivid Silva (BRA), Leonardo Fioravanti (ITA), and Jadson Andre (BRA) all fell short in their Round of 32 matchups today and will need to dig deep when the CT heads to Margaret River in Western Australia next week.

It was a successful day at the Bells Bowl for young Australian surfers Jackson Baker, Ethan Ewing, Connor O’Leary, Morgan Cibilic, Callum Robson, andJack Robinson, who all advanced through to the Round of 16.

Ewing’s speed on the waves and rhythm with the ocean helped him to secure the win with a total score of 15.73 (out of a possible 20). Meanwhile, O’Leary just scraped through by 0.2 points with a last-minute wave to win the heat over Hawaiian Ezekiel Lau. O’Leary will now face Filipe Toledo (BRA) in the Round of 16 after Toledo took down injury replacement Mikey Wright (AUS). One of the more impressive wins of the morning however was that of Jackson Baker who put on an impressive performance to overcome former Bells winner and event favorite Jordy Smith (ZAF).

“I’m stoked,” said Baker. “That round was super crucial just for points and everything with the cut coming up, but I’m trying not to think about that and just surf my best. I feel like my performances have been there and it’s just about winning those heats, so I guess things are starting to go my way. I surfed a smart heat, got the best two waves and it worked out well.”

Cibilic was able to steal the Heat 8 win from World No. 2 Barron Mamiya(HAW) with a string of strong waves to propel him into the Round of 16 where he will take on 2019 Bells winner John John Florence (HAW).

Jack Robinson (AUS) stole the show in Heat 14 against Leonardo Fioravanti (ITA) with a combined score of 16.17 (out of a possible 20). Starting out strong with a 7.00 (out of a possible 10), Robinson powered on to showcase his aerial skills and receive a 9.17 ride for a massive alley-oop.

Champion athletes continue to roll into Bells Beach with freestyle skier and Olympic Gold medalist Jakara Anthony visiting the Rip Curl Pro Bells Beach today. Swapping the snow for the surf, the Barwon Heads skier said she always tries to come down to the comp and has been following all the WSL events closely.

“I’ve watched every event so far this season,” said Anthony. “Tyler Wright absolutely crushed it yesterday, but I’m also getting behind all our Aussie girls, Sally and Steph, so it’s really exciting to watch them all. I’ve have not been able to get out in the water yet, which I’m devastated about but hopefully sometime in the next couple of weeks things will die down and I’ll have a little bit more time to do things like that.”