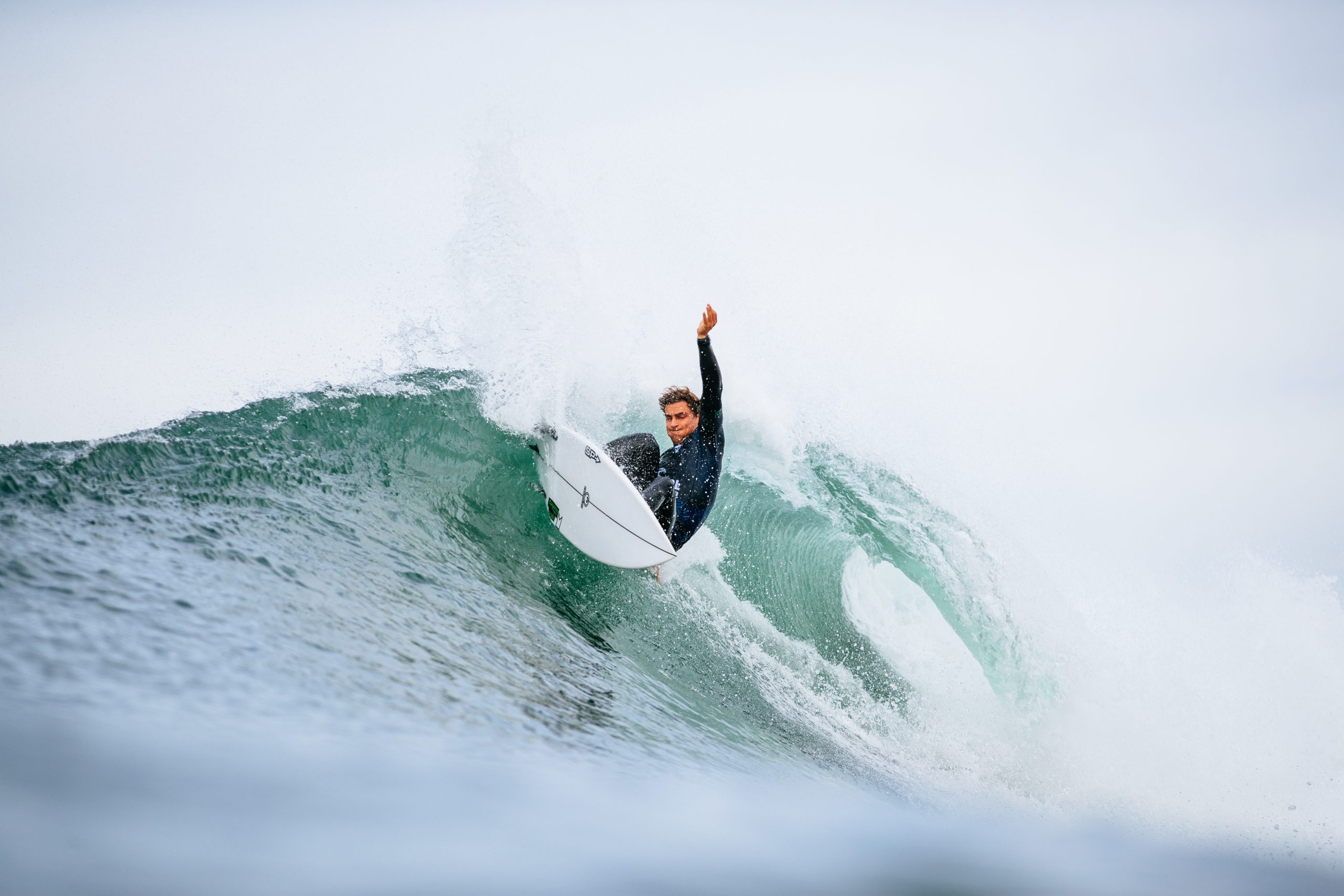 BELLS BEACH, Victoria, Australia (Friday, April 15, 2022) – The Rip Curl Pro Bells Beach, the fourth stop on the World Surf League (WSL) 2022 Championship Tour (CT),  saw a jam-packed day full of surf with the completion of the men’s Round of 16 and the women’s Quarterfinals in three-to-five foot swell with light off-shore winds. It was a great day for the world’s best surfers to take to the water and narrow the fields to the final eight men and final four women.

Current World No. 1 Brisa Hennessy (CRI) dispatched Johanne Defay (FRA) from the draw in the final Quarterfinal heat of the day. In a back and forth battle, the two powerful natural footers went wave for wave with only 0.03 separating them in the end. The win saw Hennessy progress into the Semifinals where she will take on Carissa Moore and will almost certainly hang onto the yellow jersey heading into Margaret River.

“That was a really tough heat,” Hennessy said. “I made a few mistakes at the end and Jo is such a great competitor and you know what I’m still trying to find myself. There are a lot of highs and lows in surfing and I’m going to try and ride this high for as long as possible. Last year was tough for me but I wouldn’t change it for anything as I learned a lot and am where I am today because of it.”

The all-Australian Quarterfinal saw Tyler Wright, two-time WSL Champion, defeat Bronte Macaulay, injury replacement. Macaulay had been looking solid throughout the event but was unable to best Wright’s excellent 17.17 two-wave combined score (out of a possible 20).

Heat 1 for the women’s Quarterfinals was a match-up of Bells’ champions, with three-time event winner Courtney Conlogue (USA) taking to the water against two-time Bells winner Sally Fitzgibbons (AUS). Posting a score of 14.57 (out of a possible 20), Conlogue was able to hold onto the win as Fitzgibbons failed to catch a last-minute wave that would have kept her in the race to ring the coveted bell.

“I knew it was going to be a massive battle,” said Conlogue. “We had a final in 2016 together I believe and it was quite a rally, so very grateful to have gone through. I needed that. And now she’s got some expectations on me, so I’m like I’ll ‘okay,’ I’ll keep going”.

Similar to Fitzgibbons, seven-time World Champion Stephanie Gilmore(AUS) was in serious need of a massive result here at Bells, and unfortunately, fell short at the hands of reigning five-time World Champion Carissa Moore(HAW). As the swell began to fade, Moore made the most of what opportunities existed while Gilmore struggled to find a rhythm. Moore took the matchup out and left Gilmore to focus on Margaret River to secure her spot on Tour ahead of the Cut line.

“It’s always an honor to surf against Steph,” said Moore. “She’s someone I so look up to and she’s gotten me the last few times, so I was really excited just to go back and forth and really surf, I knew we were both fired up. It’s kind of a cherry on top (to make the finals), I’m just like really psyched. Hopefully the forecast holds up, tomorrow and the next day looks brilliant, and we just get to surf and have a good time. I’m stoked to be in the Semis.”

It was a day to crack the bottom of the rankings wide open for Owen Wright (AUS), before the critical new Mid-season Cut. Taking the win over American surfer Nat Young, Wright was able to edge over his competitor with consistent waves, and clean surfing, proving he is still a dominant surfer on the Championship Tour.

Ethan Ewing (AUS) will head into his first Finals Day at Bells Beach along with West Australian dynamo Jack Robinson with the duo hoping to keep the Bells trophy on Australian soil in 2022.

Rookie Callum Robson (AUS) showed he is a force to be reckoned with, taking down four-times Bells winner and event wildcard, Mick Fanning (AUS). Fanning brought the flare in his display of skills, riding each wave to the end and giving the crowd the show they wanted. However, Robson kept his cool and seemed unfazed by the three-time WSL champion, coming in to steal the heat with a last-minute 7.77 ride (out of a possible 10).

“When I saw that wave coming in I just took a deep breath and was like, alright, this is my chance,” said Robson. “I felt like I got a little bit stuck at the start and then I got my third turn on the bowl, I actually got a good turn off and then I got lucky with that little dream inside roll. Waiting on the beach, I couldn’t really hear but my mates were giving me thumbs up and as soon as I heard it over the loudspeaker to confirm, a lot of emotion was felt. I made so many mistakes in that heat so to just give myself a shot at the end and capitalize on that, I was just over the moon. I had to fully almost just surf a brand new heat with 15 or 14 minutes to go or whatever it was.”

2019 Bells winner John John Florence (HAW) brought the heat on Morgan Cibilic (AUS) in their round, beating the Australian with a 17.77 (out of a possible 20). Florence was unstoppable with his sharp carves and excellent wave selection, making him one of the favorites to ring the bell in 2022. Despite winning the last two match-ups with Florence, Cibilic was unable to be dominant in the heat, scoring a 7.83 and needing a combination of scores to win.

“That felt good to beat Morgan,” said Florence, “Especially just after last year, we had a couple of good heats where he kind of just smoked me. So that was fun. The waves are amazing, I can’t believe it because the whole time everyone has been, ‘Oh, the forecast looks so bad,’ and then the last two days have been pretty much as good as you can imagine Bells being, besides the wind. Everything has been amazing.”

Filipe Toledo (BRA) continued his charge towards Finals Day with another impressive heat win at Bells Beach, today dispatching of Aussie goof-footer Connor O’Leary. Toledo’s lightning-quick rail surfing is a perfect match for the Bells bowl and the Brazilian looks poised to go for his first win at the Rip Curl Pro Bells Beach. To do so, he will have to overcome reigning event winner Florence.

Toledo will be joined by compatriot Miguel Pupo and 2019 WSL Champion Italo Ferreira in the Quarterfinals when competition resumes at Bells Beach.