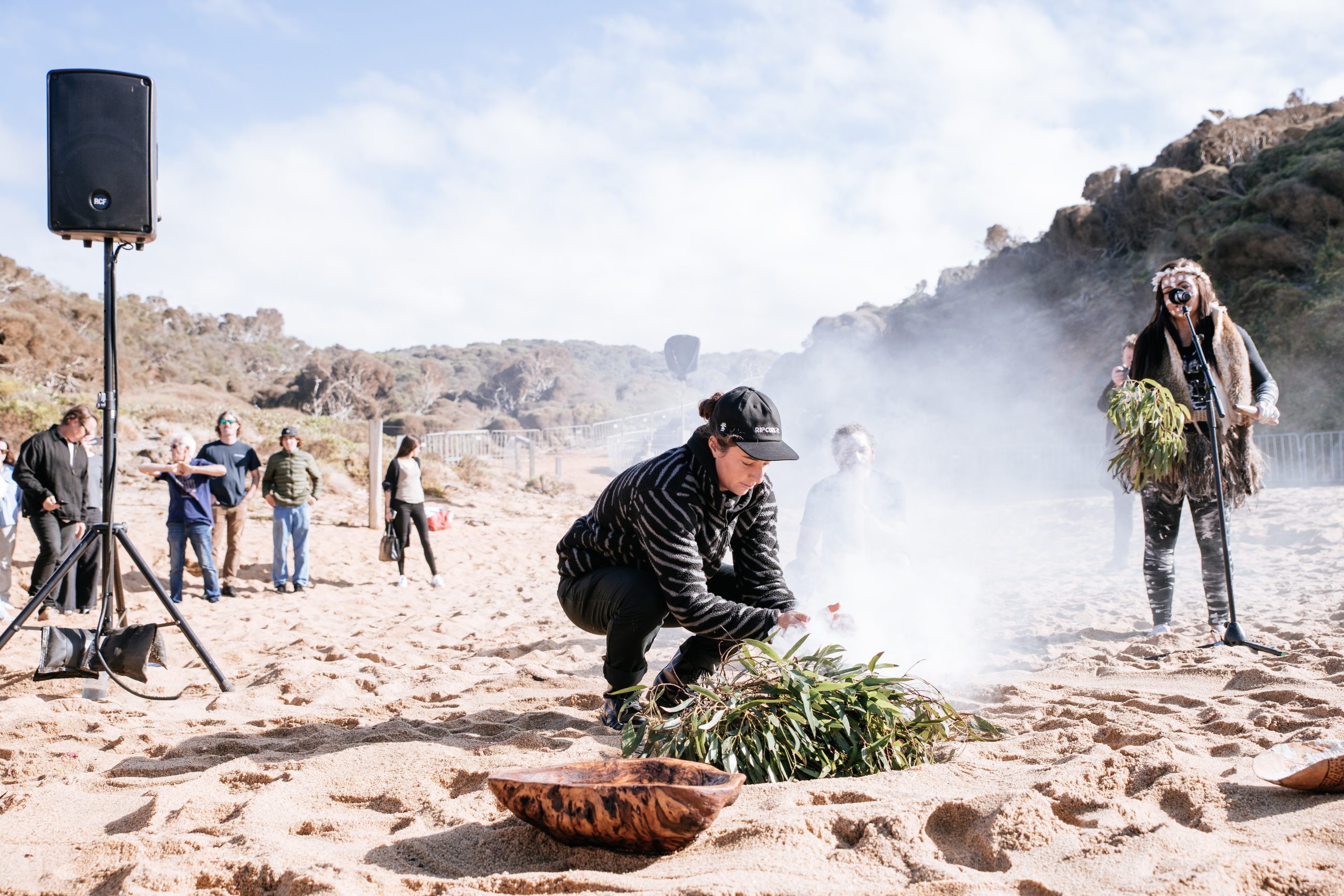 BELLS BEACH, Victoria, Australia (Friday, April 8, 2022) – The Rip Curl Pro Bells Beach, the fourth stop on the World Surf League (WSL) 2022 Championship Tour (CT), opens this Sunday, April 10, with the world’s best surfers returning to Bells for the first time since 2019. The competition window runs through April 20 and the surfing world’s attention will once again return to Australia to see who will ‘ring it’ in 2022.

After two years off the CT schedule, 2022 will see the 59th edition of the Rip Curl Pro Bells Beach, one of surfing’s most iconic events. With a winners list that includes names like Kelly Slater, Lisa Andersen, Sunny Garcia, Carissa Moore, Andy Irons, Mick Fanning, Layne Beachley, Joel Parkinson, Stephanie Gilmore, and John John Florence to name a few, the Bells trophy is one of the most coveted in the sport. This is set to be a Rip Curl Pro Bells Beach for the history books with the return to Victoria for the first time since 2019, Mick Fanning’s return in search of a record-breaking fifth Men’s Bells Title, and the looming Mid-season Cut.

Kanoa Igarashi (JPN) and Brisa Hennessy (CRI) come into Rip Curl Pro Bells Beach sitting on top of the WSL Championship Tour rankings with a massive opportunity to separate themselves from the rest of the pack and solidify a spot in the Final 5 ahead of the Rip Curl WSL Finals this September. With a Quarterfinal finish from her only start at Bells, Hennessy will be looking to go a couple of steps further at this year’s event and stamp her authority on the rest of the field. Igarashi is still looking for his first breakthrough result at the CT’s longest-running event and believes he has come a long way since the Tour last stopped in Victoria back in 2019.

“Being No. 1 in the world is crazy,” Igarashi said. “I don’t think it will really sink in until Day 1 when I check-in and put on the yellow jersey. Obviously, with the top spot comes added pressure but I won’t know what that feels like until I’m in the water and I need a score. It will be completely different territory but at the same time, it’s the same thing I’ve done since I was really young. This is one of my favorite places to come on Tour, I spend a lot of time here outside of competition and have a lot of friends here so I’m so excited to be back here.”

“In my wildest dreams I never thought I was going to be in yellow (No. 1 on the world rankings) and I just want to continue to embrace it going forward,” Hennessy said. “There’s a lot of pressure that comes with that jersey but I want to try and think of the other things that come with the color yellow, like warmth and good energy and good vibes. I’ve been here for a few weeks now and have been struck by the beautiful community and love we’ve felt–it’s definitely a special place in the world with amazing waves, coastline, and people.”

Tyler Wright (AUS) believes Hennessy does belong in the top spot. As a two-time World Champion and having spent much time at World No. 1, Wright is excited by the challenges posed by the next generation on the women’s CT. She now comes into Bells looking for her maiden win at this location.

“It’s been a long time since I’ve surfed Bells – four years I think,” Wright said. “I’ve really missed it, I’ve missed the Wadawurrung Country, the people and the community here, it’s been amazing to be welcomed back. This season has been really refreshing and challenging, for many reasons and for everyone from the very top to the rookie side. This year’s most exciting moment for me was seeing Brisa win and take the yellow jersey. As someone that’s watched Brisa grow up and become the woman she is today, she is totally deserving of being in that position and shouldn’t doubt herself in that color either. Seeing all of the young women on Tour step up and own the position they’re in and the platform they have is really impressive.”

Mick Fanning (AUS) burst onto the world surfing radar in 2001 when he won the Rip Curl Pro Bells Beach as a wildcard, before even qualifying for the Championship Tour. Now, over two decades, 22 CT victories, three World Titles, and four Bells trophies later, the surfing icon is back, once again as a wildcard, and is looking to do damage on the Top 34. The last time Fanning competed at Bells he finished runner-up to Italo Ferreira (BRA) and this week he hopes to continue his romance with the Bells Bowl. Fanning’s opening heat will see him come up against Brazilian duo Felipe Toledo and Samuel Pupo in what will be the most anticipated matchup of the men’s Opening Round.

“I guess the main thing I’m feeling coming into Bells this time around is a lot older,” Fanning said. “I was 19 back then and had more energy than most people so a bit has changed. It’s good to come back to Bells and have the event back here. I know the Rip Curl family and the Torquay community are stoked to have everyone back in town so it’s great to keep History moving on. This year has been incredible so far with Kelly winning, wildcards winning, Brisa in the No. 1 spot. It’s been a totally different look so I’m excited to be here and observe it first hand.”

2022 CT Rookie India Robinson to Fly the Flag For Torquay

India Robinson (AUS) grew up learning to surf at Bells Beach and having some of her most memorable experiences at the CT stop that she calls home. This week she will be adding to those memories as she competes as a full-time competitor at the elite level and as the sole Victorian on the women’s CT. Robinson hopes to use her years of experience to lock in her best result at a wave known for favoring those with experience.

“I used to come down here since I was 10 years old and used to ‘board caddy’ for the pros like Mick Fanning, Jordy Smith, and Steph Gilmore, so to be sitting here now amongst the CT surfers is surreal,” Robinson said. “I’ve grown up surfing this wave and have the whole local community behind me so I’m really excited for the event and hope we get some waves.”

With only two events to go until the dreaded Mid-season Cut, some of the Championship Tour’s biggest names are in serious need of a big result here at the Rip Curl Pro Bells Beach to avoid falling off the Tour after the Margaret River Pro. With the Mid-season Cut, names like Stephanie Gilmore, Wright, Sally Fitzgibbons, Jadson Andre and Ryan Callinan will be needing to pull on all of that Bells experience if they are to continue on to the second half of the CT season. With these scenarios in play, it is just another reason this year’s Bells event is a must-watch for surf fans everywhere.

Local surfer Tully Wylie (AUS) will make his Championship Tour debut this week at Bells after taking out the Rip Curl trials event yesterday at Winkipop. He will be joined by Alyssa Spencer (USA), who will surf in her second CT event but first at Bells Beach. For both competitors, it will be a great opportunity to test themselves against the world’s best with Spencer missing qualification onto the CT this year by two spots while Wylie is just getting his Qualifying Series career underway. Spencer will take on CT sophomore Isabella Nichols (AUS) and three-time Bells winner and reigning World Champion Carissa Moore (HAW) in Heat 3 of the opening round while Wylie will come up against World No. 1 Kanoa Igarashi and Peruvian rookie Lucca Mesinas.

Watch LIVE
The Rip Curl Bells Beach opens on April 10 and holds a competition window through April 20, 2022. The competition will be broadcast LIVE on WorldSurfLeague.com and WSL’s YouTube channel, as well as the free WSL app. Check local listings for coverage from the WSL’s broadcast partners.