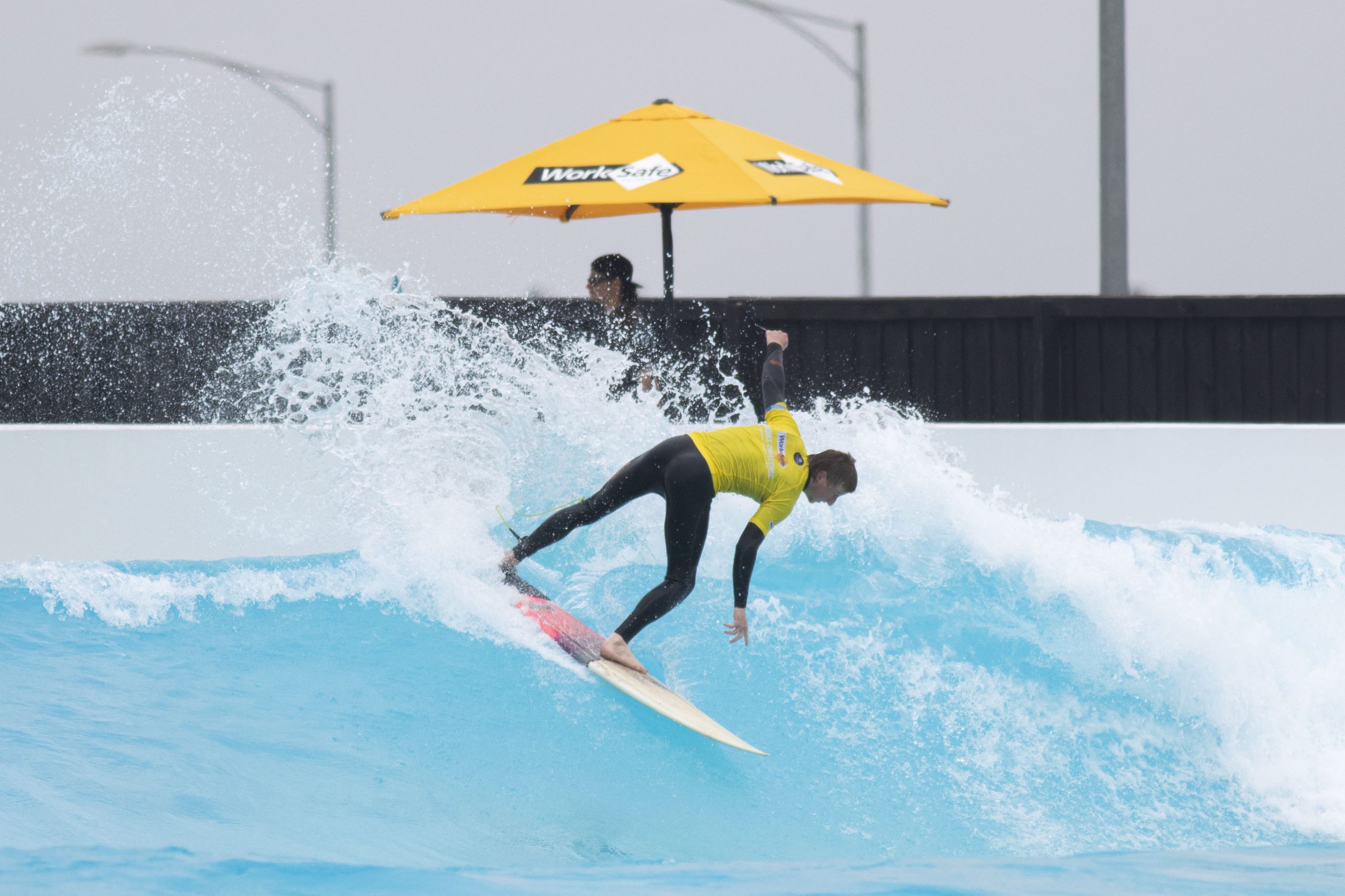 Cole Fox (Jan Juc) put on a show at URBNSURF displaying a strong backhand attack in the open men’s final of the WorkSafe Tradies Challenge presented by URBNSURF.

The competition was tight all day with the adjusted leaderboard format forcing each surfer to go big from the start in order to come out on top over the field. Adapting to this new format in style was Codie Jeffery (Cape Woolamai) and Harry de Roth (Phillip Island) who put on an impressive display of surfing.

However, Fox walked away with the win in the open men’s division, posting an excellent score of 9.07 & 7.97 (each out of a possible ten) for a string of powerful backhand snaps on the long running perfect rights of the wave pool. The win earned him a Milwaukee radio.

“It’s gonna come in handy on the worksite and at kick-ons” he added.

Placing second was Codie Jeffery (Cape Woolamai) on a 16.70 point total (out of a possible 20 points) and Harry de Roth (Phillip Island) coming in a close third on a 16.56 point total.

In the newly introduced bodyboard division Chris Watson (Rosebud) flipped his way to victory, earning himself a 15.73 point total over Jacques Le Roux who came in a close second place. Watson was able to utilise the whole wave performing a roll to deep barrel before coming out into another roll.

“I really enjoyed competing in the Tradie Challenge with a great crew,” said Watson.

“I was absolutely stoked to take the win against some epic talent for the very first time that bodyboarding has been included” Watson continued.

Finishing in second and third place was Jacques Le Roux (Gladstone park) on a 15.17 total and Ryan Jucker (Hampton East) on a 13.87 point total.

On the master’s side of the draw Arthur McKenzie (Cowes) pulled out a few tricks to impress the judges and come out on top of his competitors. McKenzie was able to put together multiple hammering turns and carves to earn himself a 9.33 point ride and the victory. However, Callan Cross (Torquay) wasn’t going to let McKenzie have the win easily. Cross earned himself an 8.33 point ride of his own but unfortunately he wasn’t able to find a back up score to overtake McKenzie.

Throughout the event the judges were on the lookout for the best one wave and Harry de Roth was rewarded with a Milwaukee radio for taking out this achievement.

“It was my first time doing the Tradie Challenge and it was a really good atmosphere amongst all the crew,” De Roth said.

“Everyone was shredding so I was stoked to come away with the wave of the day,” he added.

Full results from the day can be found at www.surfingvic.com/live