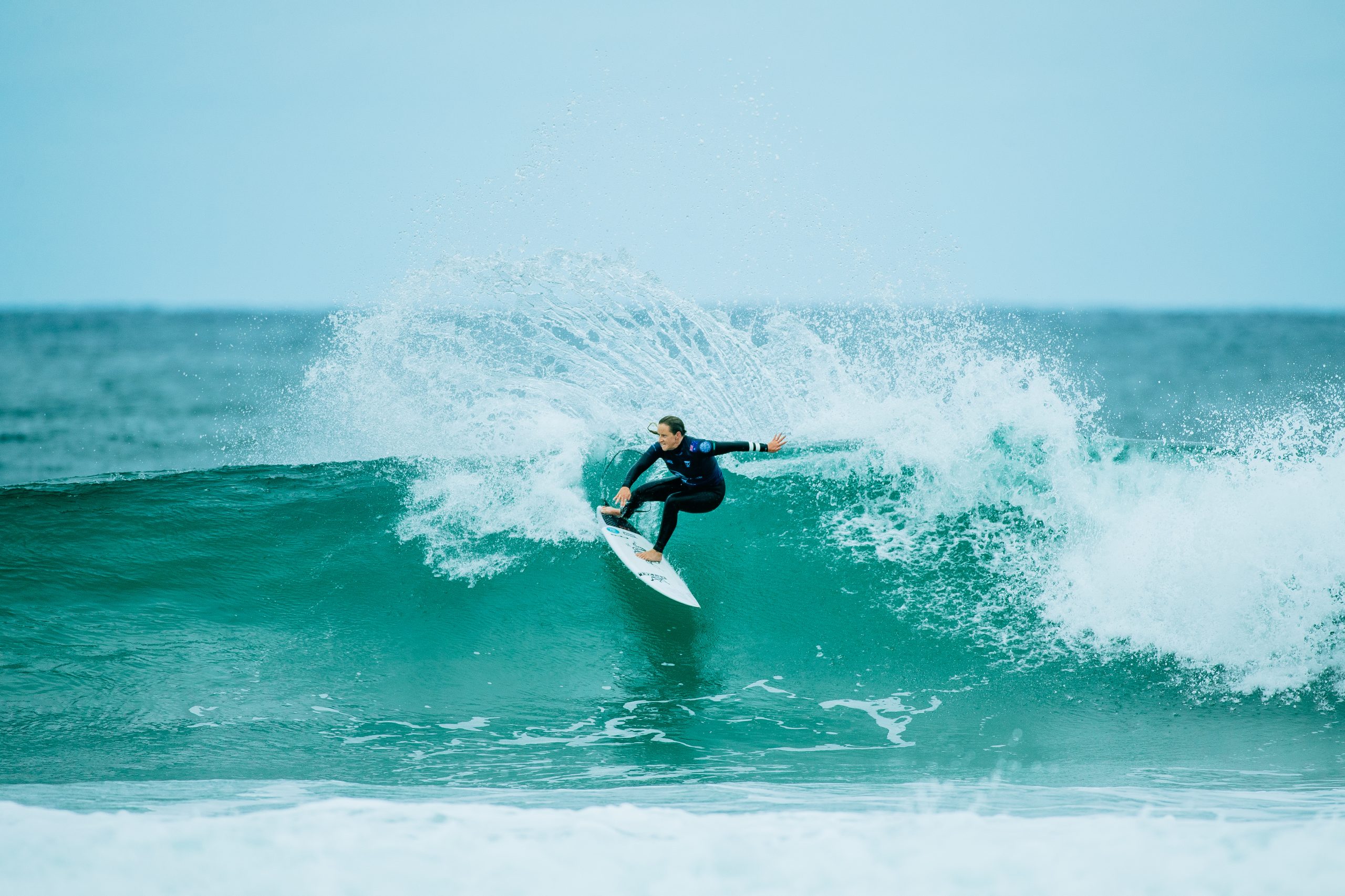 Stephanie Gilmore (AUS), Sally Fitzgibbons (AUS), and Courtney Conlogue (USA) are all previous winners at the Rip Curl Pro Bells Beach but find themselves in jeopardy of not making it through to the second half of the 2022 CT season. All three veterans are searching for big results at Bells, the second-to-last competition before the new Mid-season Cut.

Four-time Bells winner Gilmore made the most of her heat, ending up on top and beating Hennessy, who currently holds the No. 1 spot on the rankings. Two-time Bells winner Fitzgibbons was unable to progress through to the Round of 16 after placing third, just 0.54 behind fellow Australian Bronte Macaulay. Conlogue also narrowly missed out on the second position by 0.91 points against compatriot Lakey Peterson.

Two-time Bells winner and Australian World Title hopeful Fitzgibbons found herself in the dreaded Elimination Round and with the possibility of another sub-par result in 2022. Needing a massive result here at Bells to keep her spot on the Championship Tour alive, Fitzgibbons dug deep in her second heat of the day, posting a 15.10 two-wave combination to get her campaign back on track as she now shifts her focus to the Round of 16.

“After my first heat, I had another chance, paddled out with a fresh start, and just enjoyed my experience no matter what,” Fitzgibbons said. “When you put your heart and soul into your surfing and sometimes don’t have scores come your way or the results don’t flow, it can sometimes break your spirits a bit and that’s when you dig deep and trust in the work you’ve put in. I’m so comfortable down here and love competing here so it’s good to be back.”

“It’s nice to come down and watch Steph (Gilmore), watch Molly (Picklum), and a few of the other girls that are my mates,” said Barty. “To come down and watch them do their thing live for the first time, it’s so different live than it is on telly and as a fan and as a friend, I really enjoy doing it.”
Local Hero India Robsinson Advances to Round of 16, Defay and Weston-Webb Score Big

2022 CT rookie and local hero India Robinson (AUS) progressed through to the next round after placing second in Opening Round 1, Heat 5. Johanne Defay (FRA) was the stand-out performer of the heat and the day with her highest scoring wave of 8.50 (out of a possible 10) and a combined score of 16.67 (out of a possible 20). Defay found the best waves of the matchup and showed full commitment on critical sections, which were highly regarded by the judges.

“I got lucky with those two bigger waves that came through because I got them without priority,” Defay said. “It’s so cool to be back at Bells after missing the last few years. I love it down here. I stay with a great family here and have been enjoying my time, so I feel like I’m in a really good headspace.”

The other standout from the women’s Opening Round was perennial Title threat Tatiana Weston-Webb (BRA), who posted an excellent score in her heat win over Fitzgibbons and Bronte Macaulay (AUS). Weston-Webb’s 8.17 came from a series of vertical backside re-entries on a long clean Winki wall. Weston-Webb will now face fellow goofy-foot Macaulay in Heat 3 of the Round of 16.

A slow heat on the Bells Bowl yesterday saw Mick Fanning (AUS) relegated into today’s Elimination Round. The four-time Bells winner found redemption on Day 2 as the competition shifted to Winkipop. Fanning showed flashes of brilliance on the way to claiming the second progressing spot behind CT sophomore Morgan Cibilic (AUS). The three-time World Champion will now have the tough task of taking on World No. 1 Kanoa Igarashi (JPN) in Heat 9 of the Round of 32 when competition resumes.

“Yesterday was a bit embarrassing on my behalf, so it was nice to go out to go out and get some waves,” Fanning said. “It was cool coming up against Morgan (Cibilic) and Seth (Moniz)–two kids I absolutely love and cheer for on Tour. But, I’m stoked to click into gear. Winki is good, it’s different to Bells, but I love it just as much and always have fun surfing heats out there.”

Wildcard Barron Mamiya (HAW) out-performed the two Australians Ethan Ewing and Morgan Cibilic in Heat 12. Earning a 6.0 and 7.0 (out of a possible 10) early in the heat, Mamiya set himself up well to claim victory in his opening heat on Day 2 of the Rip Curl Pro.

Current World No. 2 Mamiya said he was excited with his first-round win on his first-ever visit to Bells Beach: “I’ve been surfing out at Winki for the last couple of days since I got here. The waves have been pretty small but it was super fun out there, so I’m stoked with the heat.”

“After Sunset everything kind of moves super fast for me,” Mamiya continued. “I got some time back at home after Portugal to reset and focus on the new goal. I’m super stoked to be here and I’m stoked to hopefully make some more heats.”

It was a mixed day of results for Rip Curl Trials winners with local favorite Tully Wylie (AUS) being eliminated from competition while Californian Alyssa Spencer (USA) found herself a progressing spot into the Round of 16. Spencer’s backhand was in good rhythm with the Winki walls and she’ll be hoping to carry that form into her heat with reigning WSL Champion Carissa Moore (HAW).